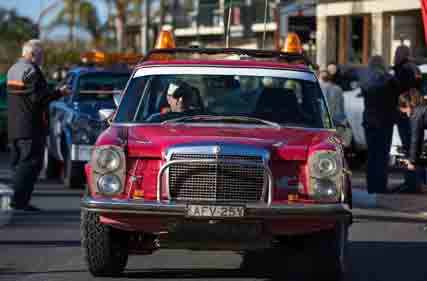 The Royal Flying Doctor Service will benefit when a special lot is knocked down at the Reiland Angus spring bull sale next month.

The September 6 sale at Killimicat Station, Tumut, will see 20 per cent of the proceeds of Lot 3, Reiland Nelson N1179, be donated by stud principals, the Lucas family, to the Royal Flying Doctor Service.

It is not the first time Reiland has donated to the RFDS at its spring sale – the stud also supports the RFDS via sponsorship of Peaty Pastoral in the Outback Car Trek.

Peaty Pastoral, Breadalbane, NSW, is a long time client of Reiland Angus and runs a 230 cow winter-calving herd, turning off weaners in January on AuctionsPlus.

Each year in June, Gavin Peaty gets out his trusty 1968 Mercedes Benz and flogs it over thousands of kilometres of outback roads for charity.

Gavin and his father John have completed nine and 25 events, respectively, of the Outback Car Trek.

The 2019 event is the 30th Anniversary and the event is on target to raise $30 million over the 30 years the event has run.

These raised funds are used to buy vital equipment for the Royal Flying Doctor Service, with a fully equipped plane now costing in excess of $7.5 million.

It is all about making Australia smaller and more accessible to basic medical services, and emergency response.

The Trek covered 4809kms over 12 days through some of the most remote parts of Australia from Renmark, SA to Darwin, NT.

Sponsored by Reiland Angus for the past three years, Gavin said some highlights of the event this year included a naming ceremony of a new RFDS plane in honour of the event, which took place at Birdsville, and seen the Phosphate Hill mine, “a mountain of single super”, at Cloncurry.

“Driving through the channel country around Birdsville and Boulia, which was entirely green with abundant feed, was amazing,” Gavin said.

“We enjoyed swimming and washing a week of dust off at Adels Gove, QLD an oasis in the middle of nowhere, and finishing the event after travelling almost 6,000km.

“This year the event encountered a lot of water crossings in the north, which always play havoc with the pre-1978 2wd cars.

“The trusty Mercedes broke the differential mount, which was welded up multiple times along the route before an old boilermaker at Mataranka made it stronger than new.

“We carry all of our spares for most things that break in the car, however did not have this part onboard.”