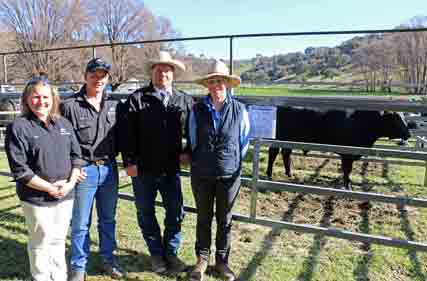 Beef producers chasing bulls with calving ease and marbling paid to a top of $12,000 three times at the Reiland Angus spring bull sale last week.
Held on-property on September 7 at Killimicat Station, Tumut, by the Lucas family, the sale drew a total of 43 registered bidders from the Riverina, NSW southern slopes, NSW southern highlands, northern and central Victoria.
A total of 61 bulls sold from the 61 offered to a top of $12,000 (three times) and an average of $6041.
Repeat clients Graham and Judy Houston, Houston Pastoral, Burrowye, Victoria, paid the equal top price twice for Reiland Mulwala M1074 and Reiland Meriton M362.
A Reiland Hilary H874 son, the August 2016 drop Mulwala M1074 weighed 890kg and ranked in the top five per cent for 600 day growth at +129kg on BREEDPLAN.
Reiland Meriton M362, a 902kg son of KO 7301 Pioneer J13, ranked in the top one per cent for retail beef yield of +2.8 and eye muscle area at +11sqcm.
Houston Pastoral bought a total of four bulls for an average of $9250.
Jo-Ann Strong, Tiana Park Pastoral, Jugiong, NSW, also paid the equal top price for Reiland Macfadden M1281.
Sired by Landfall Right Time 24J G483, the September 2016 drop bull weighed 816kg and ranked in the top 10 per cent for eye muscle area.
Ms Strong has used the Right Time bloodlines in the past and wanted to reintroduce them to the Tiana Park cowherd.
“This bull has an outstanding phenotype with a moderate birthweight, good growth, tremendous eye muscle area at +7.7sqcm and a nice IMF (intramuscular marbling),’’ she said.
Tiana Park runs 400 Reiland blood cows, turning off Angus and Wagyu-Angus cross feeder steers.
“We normally use AI within our commercial herd but not this year so have bought this new sire,’’ Ms Strong said.
“We have experienced the lowest rainfall for the past 26 years with 140mm for the year so far.
“But the sale held up quite well with a 100 per cent clearance from a loyal group of buyers who know the cattle perform.’’

Reiland Angus co-principal Mark Lucas was humbled by the “super solid” average.
Mr Lucas conceded he had not expected a full clearance due to the challenging season.
“It’s about clearance, not about the actual price. The top price was down a bit but the average was relevant to where the beef industry is at the moment,’’ he said.
“Those bulls were prepared on a sorghum crop from December 10 until March 28 without any supplement.
“We fed them silage from there on – it shows the resilience and constitution we need to keep in the breed.
“Our forecast for the next three years is to focus on days to calving and calving ease – our geneticist Dr David Johnston has instilled into us that important issue for the industry.’’
Auctioneer Michael Glasser, GTSM, said the strong loyal customer base had reinforced the sale result in a tough season.
“It was one of the most even draft of bulls the Reiland team had put up and that certainly shone through,’’ Mr Glasser said.
“The rain boosted the confidence a little but it doesn’t rain cows or grass in a big hurry.
“Buyers wanted IMF and calving ease – they want calves on the ground.
“It was good buying and selling today with an average over $6000 – people took the opportunity to pick up an extra bull because they thought it was a good day to be shopping.’’
The second top price of $10,000 was paid for Lot 1, Reiland Moonee M423, a 816kg son of Strathewen Regent E23 H70, purchased by repeat client Tom Hughes, Bannister Station, Goulburn, NSW.
Another Regent son, Reiland Molong M400, was also bought for $10,000 by repeat client Riverview Wallah, Rugby, NSW.
Riverview Wallah bought a further two bulls for $6000 and $9000.
Among the volume buyers on the day were Rodney and Andrew Purcell, Brungle, Creek with six bulls to a top of $5500.
The family finishes around 400 Reiland blood steers off grass to 450-600kg each year, and has an 800 self-replacing cowherd.
Andrew Purcell said the family selected heifer bulls with calving ease and appreciated the wide variety of genetics to choose from at Reiland.