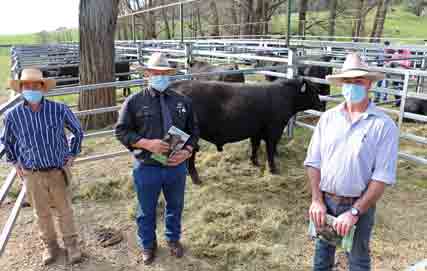 Held on-property on September 3 at Tumut by the Lucas family, the sale drew buyers from the Upper Murray, Riverina and NSW southern slopes, including five new clients.

The sale was interfaced with AuctionsPlus, with all buyers seated according to social distancing regulations.

The new average eclipsed the previous record of $11,850 set at the autumn 2021 bull sale, and is the first time the stud has grossed over $1 million at an on-property sale.

Reiland Richie R282 was snapped up for the top price by a syndicate comprising commercial enterprises from Rugby, NSW, Proudford Agricultural Company and Riverview Wallah.

The autumn drop 2020 bull ranked top five per cent of the breed for 400 and 600 day weight, had a low birthweight at +3.4kg, positive calving ease and a short gestation.

Reiland Angus retained 50 per cent semen and marketing rights in the young sire, with a semen order received from King Island and interest from Victoria.

“We plan to do an AI program in the spring using the bull over the majority of our heifers,” Mr Kelly said.

“This is our first time using AI to shorten the calving period to three to four weeks.”

Mr Kelly said positive feedback from feedlots on their Reiland blood cattle kept the family coming back to the stud.

“We will be using him in an AI program to identify first cycle heifers to shorten the calving and place pressure on fertility,” he said.

“If you pour the money into your bulls, your cattle’s reputation will get a lift from them,” he said.

Riverview Wallah also paid the second top price of $33,000 for Reiland Reedy R332, a son of Landfall Reality L76 and ranking in the top 10 per cent for eye muscle, top 15 per cent for calving ease, low birthweight and +123kg for 600 day growth.

The sale got off to a cracking start with Michael Wulfgarten, Yabtree Pastoral Company, Mundarlo, paying $24,000 for the opening lot, Reiland Quiz Q682, and backed this up with $22,000 for lot 2, Reiland Quilt Q683.

“He is a curve bending bull with the growth figures and calving ease. He will go over heifers in an AI program and cows in future,” Mr Turnbull said.

Agent Phil Gledhill, Elders Holbrook, described the sale as solid with one of the better averages in southern NSW.

“The cattle job has never been better and doesn’t look like dissipating for a little while yet,” he said.

Reiland Angus co-principal Mark Lucas said it was satisfying to see repeat clients reinvesting in their herds with improved genetics.

“The cattle industry is going through historically high – it’s a long time overdue as we have been lagging behind the sheep industry,” Mr Lucas said.

“The pundits say we are in the next five to six years of very promising, upbeat prices. Accelerated profits should be directed to align your business to make it easier and more efficient.”

Agent Ken Miall, Nutrien Ag Wagga Wagga, said the sale was strong all the way through with heifer bulls and those with high intramuscular fat hotly contested.

“The quality held up all the way – buyers were chasing low birthweight for heifer joinings in line with the herd rebuild. A lot more people kept heifers back this year and needed the bulls to go over them,” Mr Miall said.

Derek Smith, Tumbarumba, was the lucky bull buyer drawn from a hat to share in a $1000 voucher towards an artificial breeding program in his herd courtesy of Holbrook Breeders Australia.

The incentive will be split between Mr Smith and the buyers of the highest priced bull on the day.