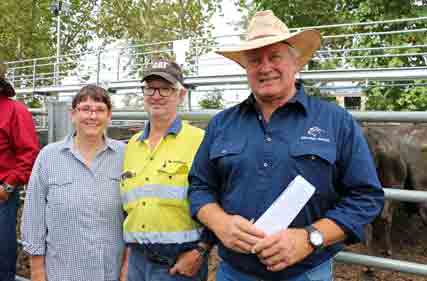 Narelle and Peter Clout, Coolac, with Reiland co-principal Mark Lucas after the sale of Reiland’s PTIC spring calving heifers and their calves for a new AuctionsPlus record of $4800.

A new AucttionsPlus record for commercial Angus heifers and calves of $4800 was set at the Reiland Premier Angus Breeder Sale at Gundagai on Friday.

Selling agents Nutrien Livestock and Elders yarded 664 head in the fixture which was interfaced with AuctionsPlus.

The red-hot restocker competition pushed prices skywards to achieve a new AuctionsPlus record of $4800 for commercial Angus heifers and calves for the Reiland stud.

The stud’s offering of a pen of 10 heifers, 505kg and PTIC for a spring joining, with spring drop calves averaging 215kg, caught the attention of top price buyers Peter and Narelle Clout, Coolac.

Mr and Mrs Clout have run Angus cattle for about 20 years but reduced numbers during the drought and are now restocking.

“We paid $3200 at Yass in August but these heifers are much younger and I know the Lucas family,” Mr Clout said.

He had expected the price ceiling to be around $3800.

“Those calves are worth $1500-$1600 and the heifers are due to calve in spring so we will get a return fairly quickly.

Paragon Pastoral, Gundagai, topped the heifers on a cents per kilogram basis at 604c/kg for a pen of 27, aged 9-10 months and weighing 271kg.

Reiland co-principal Mark Lucas said normally many of the heifers offered would have been sold into an export market.

“It is important to retain our best cattle genetics within Australia – the season has allowed us to do that this year, rather than looking at exports to China, Russia and other destinations,” Mr Lucas said.

“We have been able to maximise the value out of their genetic potential for other cattle producers.

“The strong older cow prices of $1750-$2200 are underpinning the prices today for the PTIC heifers with people putting in another $600-$700 to buy a quality young cow.

“I’m thrilled for the Reiland clients to have received some of the prices in what we are seeing in the industry, and congratulate them in presenting the cattle in such a manner today.”

Rob Stubbs, Elders Tumut, said restockers from the local districts and the Monaro were strong on the autumn and spring calving heifers.

“It was right up on the money where we thought it would be with a magnificent yarding of cattle,” he said.

“A lot of people like to see the security of that calf alongside the cows, and that’s where they paid the premium.

“People are still rebuilding and willing to pay the right money for the right genetics.”

“We are introducing some Reiland blood into the herd and we were happy with what we paid today,” she said.

“Overall, it was a very good quality sale – these heifers will be joined in June/July.”

“There was a tremendous line up of autumn drop weaners and there was a lot of value in them today as future breeders,” Mr Gilvarry said.

“They topped at $1910 and were from the Houston family as one of the first offerings of females out of Burrowye Station for many years.”

Zoe McFarlane, AuctionsPlus, confirmed the new Australian record and said there were 3000 catalogue views for the entire sale.

“We had 163 people connect and secure seven lots online, and they made 42 bids online for the whole sale,” she said.

Going into the sale, vendor Anthony Nicholls, “Dundee” Gundagai, had expected his PTIC heifers to make $2000 plus.

The autumn calving heifers sold to $3150 while the spring calving pens sold to $2600.

“We joined all the heifers last year to give us the flexibility to take PTIC heifers to market,” Mr Nicholls said.

“I didn’t know what to do with them, whether to sell them on AuctionsPlus but the Reiland sale gave us the opportunity to sell good quality genetics.”

“I AI all my heifers and this sale was a great opportunity as we have been very much part of the Reiland breeding program for 30 years,” she said.

“The market is just so good at the moment and I was hoping to get $2500 so anything extra was a bonus,” Mr Reynolds said.