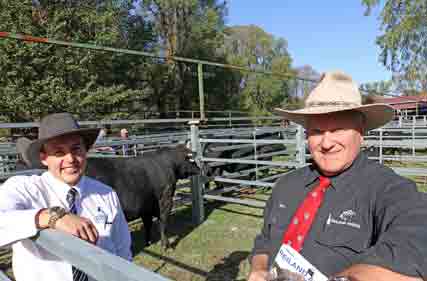 Beef producers chasing high growth bulls with carcase paid to a top of $16,000 at the Reiland Angus autumn bull sale on Tuesday.

Reiland Angus co-principal Mark Lucas was “over the moon” with the result, saying the sale was underpinned by repeat commercial buyers plus new clients from Victoria and NSW.

Norseman ranked on BREEDPLAN in the top five per cent for intramuscular fat at +3.2sqcm, top 10 per cent for 600 day weight at +125kg and had a grain index of +$152. Towong Pty Ltd bought four bulls averaging $11,000, with Graham and Judy also investing in seven bulls averaging $7357 for Houston Pastoral, Burrowye.

“They are wanting that growth and the carcase to go with it – any bulls making money were +2.5 IMF and above,” he said.

“Fortunately we have the program humming along well with eye muscle, and buyers didn’t have to compromise at all in that respect.

“Where’s the beef industry going to be with a sniff of rain?

“I see boom times coming around the corner – anyone who can hold their cow numbers and we get an autumn break, there is a big area of NSW unstocked.”

The April 2017 drop bull was sired by Reiland Hilary H874, weighed 982kg, had a scrotal circumference of 43cm.

Mr Paton said the Upper Murray had experienced a good autumn start and he had sown 100 ha of oats and ryegrass.

Mr Lucas described the sale as solid. “I was looking for low birthweight heifer bulls with positive fat,” he said.

“It has been a tough season but I haven’t fed out any fodder.”

“I was wanting all round balanced bulls to go over Angus and black baldy cows to produce feeder steers for finishing off grass to 450kg,” Mr Hodge said.

“I select bulls with a short gestation period, good eye muscle area and intramuscular fat. “This is one of the best line up of bulls I’ve seen for a long time.”

“We wanted a bull to go over Limousin and Angus heifers with good muscle and length to produce steers to turn off at 320-350kg,” Vicki said.

“This was backed up by a good strong average,” Ms O’Sullivan said.

“Buyers were selective and looking for good conformation and carcase supported by the right figures with mature cow weight in the right place.

“Commercial producers showing the support they did today reveals the confidence they have in the Reiland program.”

Sons of two of their donor dams selected for embryo transfer programs for Reiland by Wrightson stud stock agent Kevin Ryan were in the sale.

Mrs Hoogerbrug said the package of 60 embryos was selected on phenotype and calving history, and the couple was excited to see the genetics on the ground in Australia.

Reiland Angus will hold a private treaty bull sale on Wednesday, May 22.