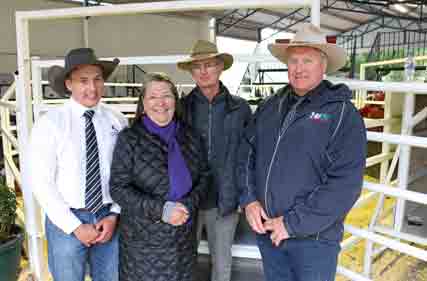 Beef producers chasing bulls with calving ease, low birthweight and marbling paid to a top of $17,000 at the Reiland Angus spring bull sale last week.
Held on-property on September 6 at Killimicat Station, Tumut, by the Lucas family, the sale drew a total of 47 registered bidders from the Riverina, NSW southern slopes, NSW southern highlands, northern Victoria and Queensland.
A total of 57 bulls sold under the hammer from the 59 offered to a top of $17,000 and average of $6203 – a rise of $162 on last year’s spring sale.
Repeat clients Graham and Judy Houston, Houston Pastoral, Burrowye, Victoria, paid the top price for Reiland Ned N1164. The underbidder was Crawford Angus, Tumorrama, NSW.
A son of Kidman Impact K99, the September 2017 drop bull ranked on BREEDPLAN in the top one per cent for scrotal circumference, top five per cent for 600 day weight and carcase weight, top 10 per cent for calving ease and top 15 per cent for birthweight.
Reiland retained 50 per cent semen and marketing rights in the 838kg frame 6.5 bull.
There was interest in semen packages from the bull in the sale barn and Houston Pastoral was able to take advantage of a $500 voucher for semen collection from Holbrook Breeders Australia.
Houston Pastoral also invested in the second top price bull at $14,000, Reiland Percy P914.
Weighing 662kg, Percy was a February 2018 drop son of Ayrvale Bartel E7 ranking in the top 10 per cent for growth and calving ease.
Mr Houston said selection criteria focused on birthweight, marbling and growth.
As a Victorian finalist in the Meat Standards Australia eating quality awards, he pointed to rewards for marbling in the commercial world.
“It was a good sale considering the season – we are going well but October 10 will be decision date around reducing numbers or continuing on,” he said.
Auctioneer Lincoln McKinlay, GTSM, described the sale as solid and a credit to the Lucas family.
“There is some real shape and power coming through the Reiland cattle and that was appreciated here on sale day,” Mr McKinlay.
“There is plenty of carcase data behind these cattle and people respond to that.“The spring bull sales have been OK considering how dry a big percentage of NSW and southern Queensland is, and how many cows have already gone out of the system.”
Reiland co-principal Mark Lucas was elated with the sale result, saying the $6203 average represented a win for the stud and clients, with an excellent clearance.
“There was a big focus on low birthweight today – there were bulls with a good spread from birth to growth and obviously the carcase data, and people identified that,” Mr Lucas said.
“There were bulls with a long history of depth of breeding, cow families going back a long way and I was pleased they were accepted by the audience.”
Volume buyer on the day, South Tahara Park, Forest Hill, bought six bulls to a top of $11,000.
Manager Tom Farley selected the bulls on calving ease and positive fat to join to 400 Reiland blood cows to produce feeder steers.
The steers are being finished on canola hay and forage cereals established on early season storm rain.
Other volume buyers included Kalkite Pastoral Company, Crookwell, with three bulls to $6000, Gavin Peaty, Peaty Pastoral, Breadalbane, taking home three bulls to $8000, Tom and Chris Hughes, Bannister Station, Crookwell, four bulls to $10,000, and Lach Harris, Wokolena Pastoral, Wagga Wagga, with three bulls to $5550.
The sale was interfaced with AuctionsPlus and was conducted by Landmark, Elders and GTSM with Michael Glasser and Lincoln McKinlay sharing the rostrum.