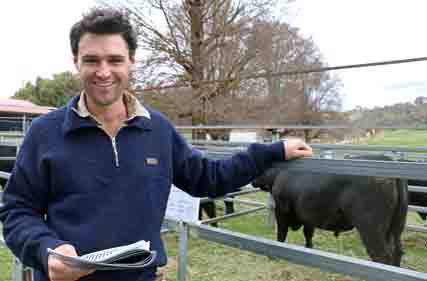 A charity bull auction by a southern NSW Angus stud has raised vital funds for the Royal Flying Doctor Service.

Agents waived their commission on the bull and the Lucas family’s Reiland Angus stud donated 30 per cent of the total proceeds.

Nick Gilvarry, Elders Tumut, was a bid spotter at the Reiland sale and paid tribute to the stud’s efforts after experiencing the Royal Flying Doctor Service himself.

“I bunged my hand when I was drafting cattle behind a gate in north Queensland and was flown from Julia Creek to Townsville,” he said.

Medical staff told him if he hadn’t reached a hospital within a few hours, he would have lost his arm.

“I have the Royal Flying Doctor Service to thank for that and am 100 per cent behind any efforts to raise funds for the service.

“Elders already donate a fair bit to the cause and soon as we heard about Reiland’s efforts, we were right behind it.”

Nick has a prominent scar on his right hand but retains full use of it today.

He relocated to the Tumut branch three months ago to specialize in livestock.

In recent years, Reiland has given back to the community by raising funds for the mental health awareness charity, RUOK?, and Wagga Prostrate Cancer Support Group.