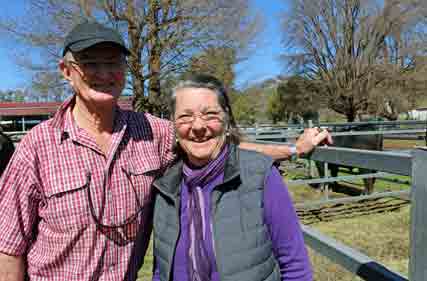 Identifying consumer trends in meat eating quality has paid off not only with premiums but also environmental and animal welfare outcomes for an Upper Murray family.

Graham and Judy Houston, with their children James, Michael and Anna, run Houston Pastoral on the 4655ha Burrowye Station in the Upper Murray.

The 2400 cow Reiland blood herd turns off 2000 grassfed steers and surplus heifers to JBS Australia and is accredited under the JBS Farm Assurance program.

Houston Pastoral was recently announced as runner-up in the Progress Award for the Meat Standards Australia (MSA) Excellence in Quality Eating Awards for Victoria.

The awards recognise beef producers who have achieved outstanding compliance rates to MSA specifications, as well as high eating quality performance, as represented by MSA Index results for MSA graded cattle during the 2017-18 and 2018-19 financial years.

To be eligible for the awards, a producer’s annual MSA-graded volume had to be equal or above the average volume consigned for the state.

The awards aim to raise awareness of best management practice from producers who consistently deliver quality beef in their state ultimately for the benefit of consumers and for the profitability of the industry.

The family made a conscious effort to identify Australian consumer trends in eating quality about five years ago and travelled to Japan to extend their study.

“We felt marbling was something that was going to be highly regarded into the future so we began identifying that trait in Reiland Angus bulls,” James said.

“Subsequently, our marbling throughout the herd in the feeder steers we present to JBS Australia average 3.1, and of our grassfed animals supplied to the JBS Great Southern program, 15 per cent grade above the MSA Index of 64 with a marbling score of 4.0 or better.

“That enhances the reputation of both Reiland Angus and has gained plaudits for that future planning we initiated five years ago.”

Up until then, the breeding program had been focused on growth, 600 day weight and feedlot performance.

Houston Pastoral has now been identified by JBS Australia as a preferred supplier.

“Working with them, we identified marbling was going to become a more important genetic trait, and the work they were doing in distinguishing between the northern and southern Angus herds has been well documented in their performance data,” James said.

“This has been reflected in the prices given back to us.

“That is something this new MSA Eating Quality Index provides and governs.”

This has been balanced with birthweight, eye muscle area, rib and rump fat.

“We place selection pressure on 600 day weight to ensure cows are not too large framed,” James said.

“We want an animal with a frame which is manageable in the hill country – with that in mind we have been focusing on the feet structure.

“As a result, we have found a positive outcome in bull longevity on-farm.

“Ideally, we look at every individual trait to put together a bull that reflects the higher end of every category, and on sale day, it is a matter of targeting those to ensure we get the bulls we want.

“To do that, we are prepared to invest in the genetics.”

“We thoroughly study the EBVs to ensure a bull is breed average or above in every trait for us to go ahead with a purchase,” he said.

“If it is lacking in one particular area, that is enough for us to overlook it.”

Houston Pastoral turns off steers from 11 to 16 months of age before mid December,

Best farm practice and a condensed calving pattern are used to minimise tail enders being fed over dry summer-autumn periods.

The Reiland blood heifers and cows are calved over eight weeks for a spring calving.

The bull battery comprises 86 sires, of which 85 are Reiland genetics.

“This year we are trialling an AI program in a portion of the heifers to condense the drop, using Reiland Norseman N818 and Reiland N1164” James said.

In order to allow the cattle to express their genetic potential, high performance pastures are sown on Burrowye Station.

The family direct drills 240ha of Economax plus oats, lucerne, and phalaris, clover and ryegrass based perennial pastures each year.

“We run the cow herd in the hills to an altitude of 800m to graze on predominantly native grasses and introduced clovers, which are annually fertilised,” James said.

“When the season breaks, the cow herd comes down off the hills for calf marking onto flush spring growth before heading back to native summer grasses activated by summer rains.

“This strategy delays weaning of 25 per cent of the herd, weaning above 300kg.

“Our property has a vast range of topography and landscape, making it interesting and challenging to farm.

“Once we have our head around that, it is quite advantageous as we can extend the season through different periods.

“Another tactical approach we have employed is sending 25 per cent of the cow herd post weaning into the stock routes, returning home to calve.

“This has allowed an autumn break to get established. Calves are weaned into containment areas with supplementary feed, primarily homegrown silage before heading out onto the improved pastures.”

Houston Pastoral has benefitted from the consumer driven shift towards grassfed beef.

“I am reading some data of the shortfall in grainfed, and that may be an opportunity in the future – we attempt to keep abreast of what consumer desire is, and provide an animal to satisfy that,” he said.