Fertility and mature cow weight needs to be on radar 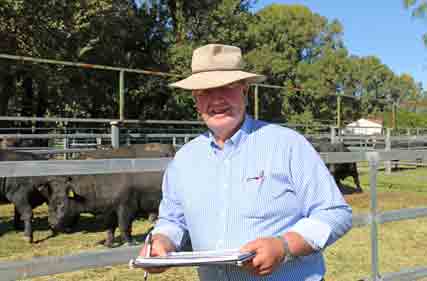 Mature cow weight is a “hot button” for the industry and independent consultant Dick Whale doesn’t hold back on the escalating size of Angus breeders.

The principal of Independent Breeding and Marketing Service, Mr Whale spoke to beef producers at the Reiland Angus seminar at Tumut on March 31.

He pointed to a failure within the breed as a whole to address fertility.

“The major fertility driver in Angus cattle is days to calving but the problem is 52 per cent of the Angus calves are now AI bred and 75-80 per cent of cows are synchronised,” Mr Whale said.

“That data is not used in the days to calving figure – days to calving is a good measure of fertility but the data is from late calving cows not AIed and small herds not using AI which is 5-10 per cent of the Angus population.

“Pre-AI, fertility was great but if we are not measuring it, it is not a great tool.”

Mr Whale said there were now genomic measures for “stayability” in breeding females, marbling and tenderness.

He described stayability as the ability of a cow to stay in production until six years of age.

He said stayability had been included in the US performance recording system for Red Angus and Simmental for the past 15 years.

“A recent germ plasma evaluation of 17 different breeds at Clay Centre (US Meat Animal Research Centre) revealed the Angus cow is the heaviest breed at weaning time of any breed in that evaluation, including Simmental and Charolais.

“Why has the Angus cow got so big, because all our indexes have been driven by growth and carcase traits with no handbrake on fertility or longevity.

“We have been through a few years of drought and how much extra feed are these high indexing cows taking?

“We do need a net feed intake EBV not just at the feedlot but back at pasture.”

Holbrook feeder steer producer Dick Turnbull said he was concerned of the impact the focus on net feed intake at the feedlot, plus rib and rump fat had on replacement heifers.

Mr Whale said the cattle industry needed to focus beyond the farm gate on the end product.

“A lot of Angus operations are interested only in how much they can sell their bulls for,” he said.

“We need to have a focus on the customer. We can’t sell beef at $21.50/kg when chicken is $6.50/kg long term unless we have African Swine Fever helping us.

“Every kilogram of beef we produce has got to eat well from a flavor and tenderness stand point.”