Angus used in composite designed to lift fertility and carcase 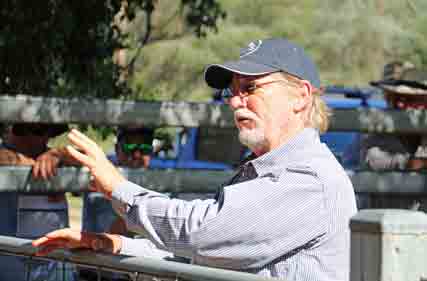 Feedlot and cattle industry consultant Kevin Sullivan outlined the Mitchell composite at the Reiland Angus seminar at Tumut on March 31.

Dr Sullivan, Bell Veterinary Service, Bell, Qld, had worked with the Australian Agricultural Company in the past on the development of the composite.

The Mitchell or AACo Composite comprises the Gulf cross and Barkley cross each stabilised to suit different environments of the Gulf country and Barkley tablelands.

The Gulf cross is a cross of Brahman, Senepol, Charolais, Red Angus and Bonsmara, while the Barkley is 50 per cent Santa Gertrudis, 25 per cent Senepol and 25 per cent Charolais.

The progeny are mostly destined for the live export market.

The females breed one year earlier resulting in a 25-30 per cent improvement in fertility over the base herd.

“With AACo, the problem they had with their northern herd was fertility – these animals needed to have improved fertility and meat quality, and be heat, fly and tick resistant,” Dr Sullivan said.

“The goal was to push meat product into the southern markets.”

The breeding program began in 1994 with the importation of Tuli and Senepol genetics.

The Tuli was subsequently discarded but Bonsmara was added to the initial Gulf cross of Brahman, Senepol, Charolais and Red Angus to inject hardiness.

Bulls are fed at the Goonoo feedlot, Queensland, to measure data including net feed intake and liveweights for a in-herd selection index.

AACO has the largest herd in Australia at around 400,000 head and developed the AACo Composite to enter the company’s grain finished beef brands.

According to the company, the AACo Composite is renowned for fertility, growth, ability to thrive in tropical and temperament production systems, superior feedlot performance and excellent carcase characteristics.

Dr Sullivan said NAPCO infused Brahman with their Shorthorn herd in the 1980s before embarking on a composite comprising 3/8 Brahman, 1/8 Charolais, 1/8 Afrikander, 5/16 Shorthorn and 1/16 Hereford.