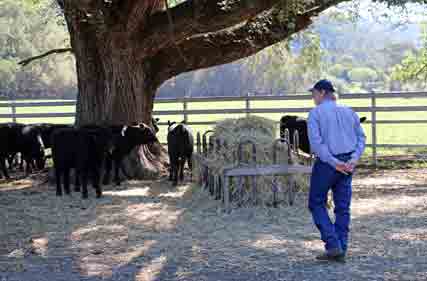 Dr Kevin Sullivan works with weaners in the yards at Killimicat Station, Tumut.

Keeping our voices to a minimum and not being above a cow’s eye level is among the best ways of keeping a mob of cattle comfortable in the yards.

Dr Sullivan, of Bell Veterinary Services, Bell, Qld, said cattle had sensitive hearing and handlers should avoid using their voice as much as possible.

“Adopt a positive attitude towards those animals, they like positive interaction in your body position and adjust your speed of movement to achieve direction,” he said.

“If you are working with sensitive north Queensland Brahmans, your movements will be a lot smaller and slower than if you were working with desensitized Wagyu.

“Apply pressure to achieve a response and reward them by taking the pressure away as soon as you get a positive response.

“Each time you interact with those animals it should be positive.”

Dr Sullivan said the eye was the point of balance in cattle.

“They are a prey animal so they are always watching for a threat,” he said.

“They can see 270 degrees around them but they struggle with depth perception or how far away something is.

“The only way they know is when it moves. They cannot see above their eyeline.

“When a cow looks up, it stops so if we are above them they will not move.”

Dr Sullivan encourages handlers at the front of a large mob to act as leaders, instilling trust, respect and patience in the cattle behind.

“If an animal is sensitive or of a poorer temperament, the handling will not take away that personality but will temper that animal so it is more tolerant,” he said.

“We need to understand weaning starts from the day the animal is born.

“This is where stockmanship sets that baby calf up for life, reducing the level of sickness later on.

“To maximise genetic potential, we need to ensure maximum foetal development and maturation, maximise the passive transfer of colostrum at birth by increasing milk letdown, encourage the maternal bond, and condition calves to accept handling for a seamless weaning.”

Dr Sullivan said acclimation was about settling cattle in their current environment.

He said cattle needed re-acclimation when moved to a new environment.

“If these cattle are happy and confident in their environment there will be improved milk let down and colostrum transfer during the post calving interval.

“Watch out for cattle which continue to wander around the pen or pasture, those who nibble but never really graze, or those who are discontent.

“Get off the motorbike or horse and walk with those cattle to show them where you want them to go.”

Allow calves to suckle for 20 to 30 minutes after birth and cow-calf bonding before ear tagging.

Dr Sullivan said it was important to greet the cow first before tagging the calf.

“Do not attack the calf first and expect the cow to stay calm. Desensitise the ear prior to tagging and then return the calf back to the cow.

“Post marking, run the 4-6-week-old calves for one to two hours on their own to learn about separation at weaning.

“Pre-weaning separate again for 12-24 hours, then put them back with their mothers, and followed by weaning. In the US this is called two phase weaning.

“Pre-conditioning is just not vaccination but a combination of handling, final day preparation, good nutrition, minerals and vaccination so the expectation is to gain weight from day one of weaning.

“The calves need to accept the transfer of leadership from the cows to the caregivers. When this happens, calves can be weaned in two to three days.”

During weaning, allow four square metres per head for each calf along with water, feed and daily interaction of 10-15 minutes by the handler.

Yard weaned cattle are 50 per cent less likely to get sick in a feedlot environment, Dr Sullivan said.