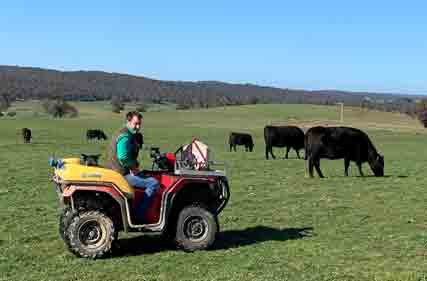 James Jeffery has received feedback on the high daily growth rate of his Reiland blood steers. His cow herd is run in the NSW southern tablelands

James was contacted by Teys Australia providing feedback on his steers fed through the Jindalee feedlot at Stockinbingal, NSW.

The 41 Reiland blood steers proved their profitability with an average daily gain of 2.341kg compared to the overall average of 1.719kg.

The draft’s average feed conversion ratio (kg ration/kg grain) was 5.387 versus the average of 7.190.

Their average MSA Index was 57 and marbling score of 451 compared to the average of 435.

The cattle are run in country ranging from 600mm to 900mm rainfall zones up to an altitude of 900m.

The herd was originally two-thirds Angus and one-third Hereford, and has swung over to a straight Angus and black baldy operation.

It is down from 500 breeding females prior to the drought but 120 heifers have been retained this year to rebuild numbers on the back of a good seasonal break.

James invested in his first Reiland bull around a decade ago and aims for high growth sires.

“I prefer the negative fat bulls to produce more muscle, and I like the bulls to be as deep as possible all the way through,” James said.

“I used to look at bulls with high milk figures but now I’m using early weaning, it is not so important.”

James has used Hereford bulls over Angus cows to take advantage of hybrid vigour in the progeny.

“I thought the black baldy calves would have been heavier across the scales but I’ve found there is no difference between the straight blacks and black baldies,” he said.

“A well bred straight black steer is as good or better than the black baldy.

“The off spring of every single Reiland bull I’ve had has been quiet. This is important as the majority of the time I’m working the cattle on my own.”

James classes up the heifers in the spring calving herd, having kept an eye on their average daily growth rate through regular weighing.

“I’m chasing those genetics with a high growth rate and also select the heifers on visual appraisal.

“They are joined at about 16 months or a little earlier, depending on liveweight, and then pregnancy scanned.

Due to the drought, the calves were early weaned in January down to 130kg liveweight onto pellets.

“It is the first time I have done that and will do the same this year,” James said.

“I have three holding yards with bunks and the calves are drafted into contemporary groups based on weight.

“The heavier group were finished in four weeks and the lightest group a few weeks longer.”

The calves were turned onto improved pasture followed by grazing cereals.

James aims to improve on the high country native pastures by direct drilling cocksfoot and phalaris.

He also sows oats and barley to fill the autumn-winter feed gap.

James is impressed with the longevity of the Reiland bulls and is happy with the customer service from the stud.

“The program is progressive and underpinned by a large commercial program.”

He is prepared to invest up to $10,000 on bulls as he sees the benefits in using high performance genetics.

“All the bulls have been extremely quiet and I can go there to look at their bulls one-on-one in the yards,” he said.

“I’ve never had a bull break down and they are joined at the rate of 1:40 over eight weeks.

“The Reiland bull genetics are getting better and better all the time, and the herd improves with them as the traits are coming through in the off spring.”

James recently sold PTIC cows, aged six to nine years and weighing 642kg, to top AuctionsPlus on $1950, and were bought by a Moss Vale buyer.