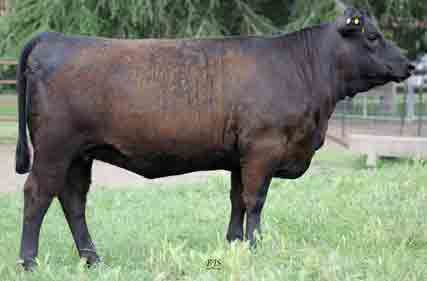 Reiland New Design Q110 will be among the elite joined heifers to be offered at the East Meets West sale on December 4.

Two Angus studs from opposite ends of the nation have combined to offer producers an opportunity to select elite Angus heifers boasting calving ease, docility, positive carcase traits and moderate to high growth.

The online sale will be hosted by AuctionsPlus on Friday, December 4, 2020, at 5pm EST and feature 70 heifers joined for an autumn calving, and elite embryo packages.

Reiland co-principal Mark Lucas said the sale would provide the Angus market with a line of selected pregnancy tested heifers meeting strict selection criteria based on fertility, type and quality.

Michael Glasser from GTSM initiated the discussion between the two studs and the result is an offering of selected young heifers developed within a grass-based system and achieving pregnancy under the past tough drought conditions.

“The breeding philosophy of both vendors is in parallel and as such the heifers will provide Angus enthusiasts an opportunity to select programs based on EBV’s, genomics, sire verification, strict phenotype and a temperament emphasis,” Mr Glasser said.

The stud sells around 220 bulls each year.

There is a significant commercial program which develops upward of 400 feeders steers each year.

“We engage a geneticist and an impartial consultant to provide objective and relevant advice on genetic selection and herd progress,” he said.

“The offering of heifers are surplus to requirements and provide an opportunity for registered or commercial herds to gain access to a line of heifers that have not only survived the past three years of drought but have performed and gained pregnancy.”