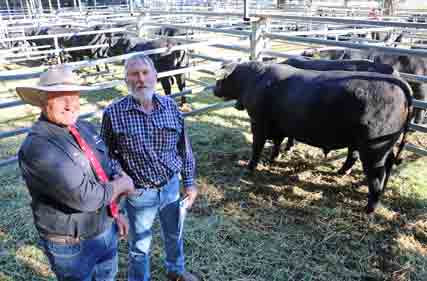 Interfaced with AuctionsPlus, the sale was hosted by the Lucas family at Killimicat Station, Tumut on April 21 and drew 66 registered buyers from NSW and Victoria.

The 18-month-old bull weighed 774kg, had a scrotal circumference of 41cm, and all selection indexes in the top 2 per cent.

Quartile was sired by Avalon Angus Lubar L20 and was out of Reiland Cashflow K405.

He was impressed with Quartile’s overall completeness, strength through the topline, temperament and tight sheath.

“We will be AIing all our Angus heifers to him,” he said.

Houston Pastoral went on to take home a truckload of 10 bulls for an average of $16,300.

Reiland Angus retained a 50 per cent share in semen and marketing rights in the bull.

Houston Pastoral also paid $21,000 for Lot 37 Reiland Quenn Q323, an 804kg son of Esslemont Lotto L3 and ranking in the top 1 per cent for eye muscle area and carcase weight.

Reiland Angus retained a 50 per cent semen right in the bull.

Reiland co-principal Mark Lucas described it as a “breakthrough sale” with plenty of buyer competition online.

“We have bulls that have gone to the middle of Queensland, including a stud bull to Bunyah Angus,” he said.

“It is a new sale record average for us and the consistency of the bulls was reflected in the prices.

“People are still looking for IMF with more pressure put on that as a trait, and good headed soft skinned cattle with carcase.”

Elders Tumut agent Nick Gilvarry said it was an outstanding sale and a credit to the Lucas family.

“The market reflected the quality of the cattle – a lot of people who operated at the female sale came back and bought bulls,” he said.

“It shows with the current market people are prepared to spend money for good quality cattle.”

“We run medium framed cows and turn feeder steers off to Stanbroke Pastoral at 450-480kg live,” he said.

“We changed to Reiland blood 15 years ago and they are the most generous family, helping us out with AIing last year.

Another volume buyer was Dougal Kelly, Riverview Wallah, Rugby, NSW, investing in three sires ranking in the top 10 per cent for marbling and averaging $16,666.

Reiland’s private treaty bull sale will be on Tuesday, May 18, the spring bull sale on Friday, September 3 and the stud is gearing up for a special stud cow and heifer sale in February 2022 to celebrate its golden anniversary.