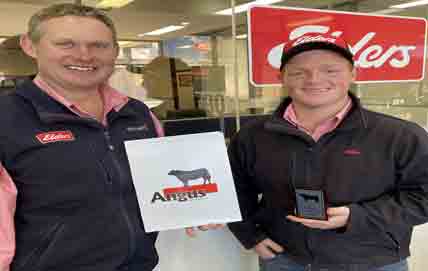 Jesse Gauci has been announced as the winner of the prestigious 2020 Norman Lethbridge Award presented by the NSW Committee of Angus Australia.

Due to the cancellation of the 2020 Sydney Royal Easter Show, the Norman Lethbridge Award could not be presented to winners at the Angus judging.

This year prizes and awards were mailed to winners.

Breanna Smith, Barry, NSW, was in fourth place and was nominated by Blayney High School.

Felicity Webb, Oberon, was nominated by Scots All Saints College and was in fourth place.

The award began in 2002 and was named in honour of the New South Wales State Committee’s past secretary Norman Lethbridge.

He was a stock and station agent for most of his working life, with the majority of his clients in the County of Cumberland in Sydney.

A large number of his clients were located in the County of Cumberland and within 200 kilometres of Sydney.

The award is open to students and cadets over 16 years and under 25 years of age, studying agriculture, livestock auctioneering or stock and station work.

The applicant must reside within 200km of Sydney.

The same committee formed at the inception of the Norman Lethbridge Award, comprising Christine Erby, Mark Lucas, Simon Hennings and Richard Buck, have interviewed applicants and adjudicated for the past 18 years.

Past winners of the award are succeeding in the agriculture industry and include 2002 winner Rachael Parkes, who along with her husband Ged Mullins, runs the largest dairy farm in Queensland.

Nominations for the 2021 Norman Lethbridge Award will close on November 20.