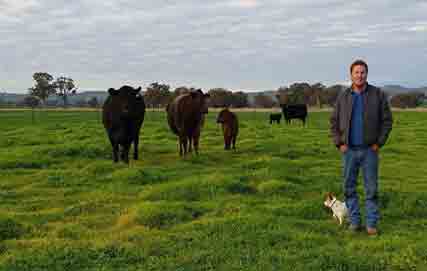 An injection of Reiland genetics has helped one Riverina couple to lift carcase quality in their cattle.

Shane and Jenny Priestly, of Gregadoo, run a herd of 60 Reiland blood females on their 142ha property, Karinya, in a 625mm rainfall zone.

The spring and autumn calving herd is joined to Reiland Angus and Onward Murray Grey bulls to turn off heavy grass fed steers into the prime market.

All but one of the five steers had a marble score of two and qualified for the Riverine Premium Beef brand.

The couple had run a commercial herd of Murray Greys in the Tumbarumba district before downsizing to Gregadoo and moving into Angus.

Shane’s connection with Reiland principal Mark Lucas goes back to the mid 1980s when he was employed as an agronomist with the NSW Department of Agriculture.

“He consulted for us for many years at our Tumbarumba farms,” Mr Priestly said.

“When we sold our Murray Greys we thought we would fatten steers but steers were expensive at the time, and we decided to go into breeders.

“We purchased mixed age cows from Reiland in 2017 and joined them to a Murray Grey bull.”

The F1 heifer progeny were joined back to a Reiland bull. Some Murray Grey females remain in the herd and they are joined to Angus.

“With the hybrid vigour, the crossbred cattle certainly come away very quickly in this area,” Mr Priestly said.

“We find they put the weight on and are quite happy with them.”

He selects his Reiland bulls on BREEDPLAN EBVs, muscle pattern and structural soundness.

“We were looking for lower birthweight as these bulls are put over heifers,” he said.

“Calving ease is important, along with eye muscle area and marbling in a mid maturity pattern.

“We aim to breed functional females that suit our environment and market – that is, getting cattle to 450-500kg as quickly as possible.”

Shane and Jenny class their own heifers on structural soundness, shape and fertility.

Heifers are joined over six weeks to calve at 24-26 month while cows are joined for nine weeks. All empty females are culled.

Calves are yard weaned for 10 days on hay or silage, with education to low stress handling through the yards, and then onto forage crops or silage.

The steers are turned off through the Wagga saleyards at 450-500kg liveweight.