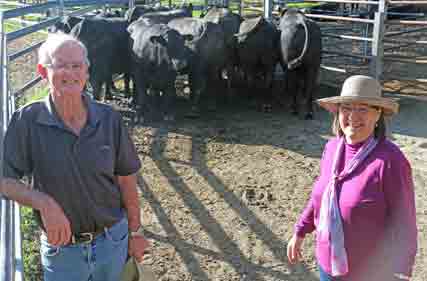 Graham and Judy Houston, Burrowye, Vic, bought 11 bulls to a top of $28,000 for Houston Pastoral and Towong Pty Ltd at the Reiland Angus autumn sale.

Beef producers chasing high growth bulls with marbling paid to a top of $28,000, setting a new record for the stud at the Reiland Angus autumn bull sale on Wednesday.

The sale was interfaced with AuctionsPlus, with all bulls presented in a video format and buyers seated according to social distancing regulations.

Reiland Angus co-principal Mark Lucas said the sale result was a “big relief” after coping with drought, fire and the COVID-19 restrictions.

Sired by Esslemont Lotto L3, the 21-month-old bull weighed 772kg and ranked on BREEDPLAN in the top 2 per cent for all indexes, had an intramuscular fat (IMF) of +4.5 and was top 7 per cent for eye muscle area (EMA) at +9.2sqcm.

Reiland retained a 50 per cent semen share and marketing rights in Plymouth. The bull has already drawn several seen enquiries, including international interest.

“The top price bull will be AIed to about 700 (commercial) heifers to produce top quality replacement heifers,” Mr Houston said.

“We aim to lift marble score – our whole steer average is +2.7 now and we want to get that over three.

“We are using bulls mostly 3.0 plus for marbling.”

Mr Houston was surprised at the strength of the sale.

“The turnaround from the fires has been remarkable – the season has been terrific from where we were on January 3 when it was an absolute shambles,” he said.

“We lost 10,000 acres and a lot of cattle had to be fed the next day. We have since sown a lot of ryegrass as all the annuals got burnt.”

The Lucas family donated 10 per cent of the proceeds from Port Louis to the Wagga Wagga branch of Can Assist to help regional cancer patients.

Mr Stubbs filled orders from local clients who were self-isolating at home.

“The sale was very strong and well supported by those who could be here and through AuctionsPlus,” he said.

“We were looking for moderate birthweight with growth. It was a good draft of bulls and that was reflected in the strong average.

“We are one fall of rain short of being a good autumn up here. The cattle market has been good but as long as it remains sustainable through COVID-19.

“Through all of this, our industry has made the necessary adjustments and functioned very well.”

Auctioneer Michael Glasser, GTSM, said a new era had dawned in how bull sales were held.

“Don’t be afraid of the technology if you need to use it –it’s extremely efficient,” Mr Glasser said.

Co-principal Mark Lucas said clients adapted well to the new pre-sale inspections days and made the transition to digital selling.

“The primary comment was people liked looking at them in the yard rather than pens,” he said.

“They also liked the uniformity of the bulls this year.

“Buyers were chasing IMF and growth – it backs our philosophy of keeping birthweight around breed average, and pushing the table on growth.

“I’m a little traditional and when we get the opportunity, we will be seeing bulls through the ring again.”

Mr Lucas said with the exposure through AuctionsPlus, five bulls sold to the Coonamble and Binnaway districts.